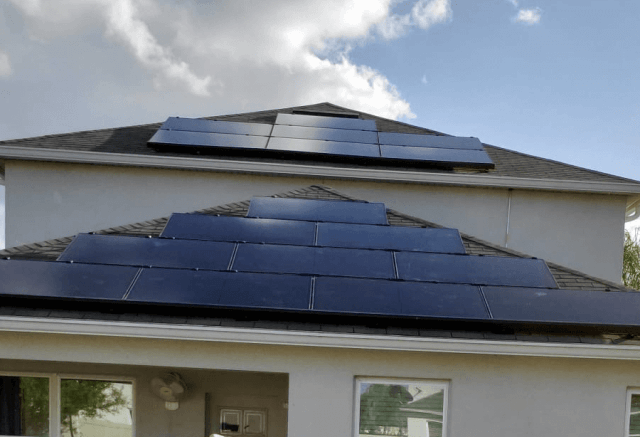 Angelica Bermudez and her husband Jose went solar about 15 years ago. They added solar panels to their roof when they bought their home in Orlando, Florida. Since then, a lot has changed. Most significantly, their children have grown up, and Angelica’s mother, Theresa has moved in. One thing they’ve learned is that solar panels are reliable.

The solar system has never needed maintenance. No parts broke, and weather didn’t interrupt power delivery. It was the definition of “set it and forget it.” After 15 years, their solar system is still going strong. Although, the Bermudezes will make their last loan payment next month, it will continue to do so for about 10-15 more years.

Over the years, solar saved money on their power bill. They’ve slept well at night knowing solar energy is environmentally friendly. Jose said their solar panels increased their home value, as well. But it was just recently that the Bermudezes realized why they value solar panels most.

Last year, Angelica experienced serious health concerns. Medical technology and her team of doctors were able to save her life. Today, the family is even more grateful for each day they can spend together.

After a lengthy stay in the hospital to recover, her doctors allowed Angelica to go home. She would need to make some lifestyle changes, as well as rely on a life support device. The Bermudezes didn’t mind. They would happily do whatever they needed to have her home again.

But first, Jose needed to find out if his solar panels are reliable enough to support Theresa’s medical device. Doctors and a professional solar consultant agreed that the device would function properly on solar energy.

It wouldn’t be long before he would have a real-life test. Soon after Angelica arrived home, a storm hit. The storm came with particularly heavy rains. Eventually, the rains knocked out the local power lines for four days.

The Bermudez family felt reassured when their solar system’s back up battery kept the medical device going strong without interruption. In fact, her stairlift remained operable, as well.

The storm passed, and the Bermudez family experienced no loss of power. They lost no food from their freezer or refrigerator. Everyone kept their phones charged. Most importantly, Angelica’s medical device didn’t skip a beat.

The family won’t forget those few challenging months. Just after Angelica was fighting for her life, an intense storm hit. The family stuck together and got through it. “We couldn’t have done it if we didn’t have solar panels,” says Jose.

That thought made him wonder about the possibilities that solar can have in remote parts of the world. Many of them have no access to electricity or it’s not cost effective. Moreover, solar panels are reliable enough for hospitals, too. In fact, they also reduce power costs for them by hundreds of thousands of dollars.

When the Bermudez family bought their house, they added solar panels. They knew that solar panels are environmentally friendly. They expected their solar panels to save money on their power bill. Angelica and Jose even knew solar panels are reliable. They just didn’t realize that they could save a loved one’s life. But they did.